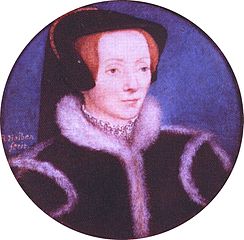 There’s a never-ending tension between what we profess to believe and what we put into practice. Catherine of Willoughby, Duchess of Suffolk, knew this very well. Born in 1520 and named after Catherine of Aragon, she married, at just 15, Brandon Willoughby, the grandfather of Lady Jane Grey, and the favorite courtier of King Henry VIII. Stephen Gardiner, Queen Mary’s henchman, was her godfather, and Hugh Latimer gave her spiritual counsel, even preaching his sermons on the Lord’s Prayer at her estate. Her closest confidant was William Cecil, Queen Elizabeth’s chief advisor for most of her reign.

Born into a Catholic home, it’s unclear when Catherine converted to the Reformed faith, though we do know that she was passionate about sharing the gospel with those in her county and was frustrated with Queen Elizabeth’s slow reforms in the Church, a Church she considered to be just “a shadow of the Roman church.”

In John Strype’s Ecclesiastical Memorials, Catherine is described as “very active in seconding the efforts of government to abolish superfluous Holy Days, to remove images and relics from churches, to destroy shrines and other monuments of idolatry and superstition, to put an end to pilgrimages, to reform the clergy, to see that every church had provided, in some convenient place, a copy of the large Bible, to stir up the Bishops, vicars and curates to diligence in preaching against the usurped authority of the Pope; in inculcating upon all the reading of the Scriptures, and especially the young, the Pater Noster, the Articles of Faith and the Ten Commandments in English.”

In 1551, Willoughby suffered the loss of her first two sons, who died from a “sweating sickness” that swept through their college. Her submission to this hard providence is most admirable.

I give thanks, good Master Cecil, for all His benefits which it hath pleased Him to heap upon me; and truly I take this last (and to the first sight most sharp and bitter) punishment not for the least of His benefits, inasmuch as I have never been so well taught by any other to know His power, His love and mercy, mine own weakness and that wretched state that without Him I should endure here.

After the death of her first husband, Catherine married Richard Bertie, a devout Puritan. It was with him that she fled to the Netherlands and later Poland to avoid execution under Queen Mary. However, the reasons for her persecution by Gardiner are a bit muddied, considering Catherine’s previous public humiliation of him. Was he pursuing Catherine because of her Reformed faith or because of a thirst for revenge? Speaking of Catherine to Bertie, Gardiner asks,

..is she now as ready to set up the mass as she was lately to pull it down, when she caused a dog in a rochet to be carried and called by my name? Or doth she think her lambs now safe enough which said to me when I veiled my bonnet to her out of the chamber window in the Tower, that it was merry with the lambs now that the wolf was shut up?

Though their four years in exile was certainly difficult and full of hardships, God’s mercies were abundant. He gave them a second child and blessed them with a leadership position in Poland, a country which was mostly Protestant at the time.

When Richard and Catherine returned to England, Queen Elizabeth was on the throne and many personal challenges lay ahead. It’s in Catherine’s letters that we see much of her struggle with God’s sovereignty. She doesn’t speak against Providence, but her actions show the wrestlings and wranglings of an anxious heart. Her days appear to be spent in frustration over the slow reforms in the Church, in battling for Titles for her husband and son-in-law, in procuring the Queen’s approval for her son’s marriage, and in vexation over a disagreeable daughter-in-law. One biographer found her behavior such a betrayal to her faith that he declared it would have been better for Christian posterity  “would that she had died younger.”

Yet, even in the last letter we have in which Catherine is pleading with Cecil about her son, she affirms her belief in God’s best:

Wherefore but God’s will be fulfilled, who worketh all for the best to them that love and fear Him; wherefore were not that hope of Him thoroughly settled in me, I think my very heart would burst for sorrow.

A wise man said that we cannot determine a man’s character by one act. Surely those of us who have fully tasted God’s grace recognize what mangled pieces of clay we are, in desperate need of God’s refining fire and His endless mercies. We would not dismiss Catherine because she failed to finish as we hope and expect. Instead let her failings encourage us to remember that the bigger sacrifice often comes, not in doing “big things” for God, but in the daily dying to self in the midst of hard providences.

May our surrender to God’s sovereign care over us be not only words put to paper or stimulating discussions around the dinner table, but rather a truth so firmly impressed in our hearts and minds and souls that we radiate the beauty of a mortified self to the world around us. Let us be instruments of His grace to each other, offering encouragement and prayers to finish well, yet ready to pick each other up when we fall.

Most importantly, let us never forget that the theology we profess must take hold of our hearts and transform how we live. This is at the heart of the Reformation, too, and perhaps in her failings, Catherine teaches us the best lessons.

About the Author: Trisha Poff rejoices in the God of her salvation. Her life is nothing but a multitude of His mercies, and she delights in being the wife to her Mountain Man and a Mama to eight blessings from the LORD. She’s a bibliophile who loves the Word, chocolate and pens, and making the ordinary extraordinary. You’ll find her trying to tell of God’s wondrous works with a voice of thanksgiving (Psalm 26:7) at The Good Life.