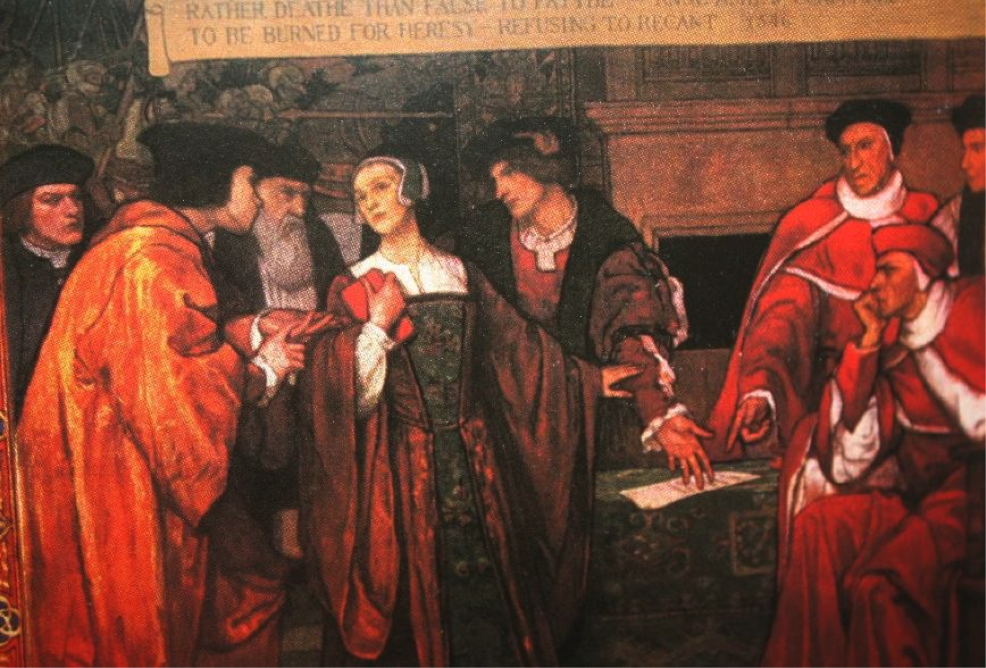 “Yet lord, I thee desire
For that they do to me
Let them not taste the hire
Of their iniquity.”
Anne Askew¹

Queen Katherine knew very well that her husband could arrange a meeting with the guillotine for her just as easily as he had with his 2nd wife Anne Boleyn and his 5th wife Catherine Howard. Therefore, she was always obedient and gentle toward this man who had become morbidly obese and was known for being erratic and moody.

The Reformation period was as much about political intrigue as it was about the fight to reclaim the Truth of the Gospel that had been shrouded for centuries in Papal darkness. Henry was noted for his fickle changeability, favoring either Protestant or Catholic interests depending on which party furthered his own purposes best. Even though Katherine had many enemies among the Catholics in Henry’s court, the King chose to look the other way while his Protestant Queen surrounded herself with like minded noblewomen. Spending their days together praying and studying the Bible, these women were privileged to have amongst them many notable guests including the Evangelical preachers Hugh Latimer and Nicholas Ridley. A decade later, these men were to be counted among the nearly 300 martyrs to be burnt at the stake under the tyrannical rule of “Bloody Mary”, who was the only child of King Henry and his first wife Catherine of Aragon.

Undoubtedly, the good company Katherine Parr kept at court combined with her tender heart and godly character had a tremendous impact upon her 6 yr old stepson Prince Edward and his young cousin, the Lady Jane Grey, who would later be martyred for the Gospel after being crowned Queen for a mere nine days.

Anne Askew
Among Queen Katherine’s companions at court was the spirited Anne Askew (also spelled Ayscough) the daughter of Sir William Askew of Stallingborough, Lincolnshire who had been knighted earlier in King Henry’s reign . Anne was born in 1521 to Sir William and his second wife Elizabeth at South Kelsey just 4 years after Martin Luther nailed his 95 thesis to The Castle Church door in Wittenberg, Germany. The church door functioned as a public bulletin board and Luther had intended to create a debate amongst his peers by protesting the abusive practices pertaining to the sale of indulgences, and by challenging the teachings of the Roman Church regarding penance and the authority of the pope. Although Luther had not yet come to a saving knowledge of Christ through the understanding of justification by faith alone, this single act of divine chutzpah set into motion the beginning of the Protestant Reformation that would change the world forever.

Anne, having come from a prominent family, was highly educated and while living in Lincoln, “was seen daily in the cathedral reading the Bible, and engaging the clergy in discussions on the meaning of particular texts,”2 Anne’s youngest brother Edward was the king’s cup-bearer during her time at Katherine’s court.

Some years earlier when Anne was 15 years old, she had been forced into an unwanted marriage with Thomas Kyme, a wealthy landowner and Catholic who had been engaged to her sister Martha who had died. The continuous friction between Anne and her husband over her Protestant beliefs caused him to seek council from the local priests who advised him to throw her out hoping that she would change her ways. It was said “that she was the devoutest woman he [Thomas] had ever known, for she began to pray always at midnight, and continued for some hours in that exercise.” 3. Little did they realize that Anne was so passionate about her faith that she petitioned, though unsuccessfully, for a divorce and sought solace in the company of her supporters and relatives at court. Forced to leave her two children behind with her husband Anne took back her maiden name and began handing out tracts and literature which soon became banned. She also began giving public messages in London becoming well known as a “Gospeller”.

Meanwhile, in the political arena, adversaries of the Reformation such as Stephen Gardiner, the Bishop of Winchester, Thomas Wriothesley, and Edmund Bonner, Bishop of London had taken notice of the fact that the influence of Queen Katherine not only encouraged the Evangelicals to become increasingly bold, but young Edward, the heir to the throne was being heavily influenced by her. Because King Henry was a personal friend of the Reformer, Archbishop Thomas Cranmer, they were unable to make any headway with him in promoting their “Old Religion”. So their plan B was to strike circuitously at the throne:
“Not daring to strike at the throne directly they found an easier target: Anne Askew, bright, articulate and fearless, was a lady-in-waiting to the Queen. Had she not been diligently promoting the spread of evangelical literature amongst the London apprentice boys? She had even been heard to say ‘I would sooner read five lines in the Bible than hear five masses in the church’. Such words were heresy in Catholic eyes. Anne was seized, imprisoned and interrogated cruelly by Bonner” 4

When Anne was first arrested and interrogated in March of 1545 she refused bail and stayed in jail for 11 days writing details of these accounts, as she also did after her subsequent arrests. She recorded the ridiculous questions her persecutors asked to entrap her such as,
“If the host should fall, and a beast did eat it, whether the beast did receive God or no? I answered, ‘Seeing that you have taken the pains to ask the question, I desire you also to assoil [pardon] it yourself: for I will not do it, because I perceive you come to tempt me.”5
Anne’s third and final arrest in May of 1546 resulted in imprisonment at Newgate prison where she was convicted of heresy on the grounds of denying the doctrine of transubstantiation and given the death penalty.

Because these interrogations were of a political nature Anne was taken to the Tower of London and placed on the Rack to be tortured making her the only woman in recorded history to have suffered this torment. Attempts to force her into implicating other women in the Queen’s court and denying her beliefs failed even though she fainted twice under the immense suffering. Because of the prominence of her family she was given the opportunity to recant her beliefs, yet she refused and instead gave an eloquent confession stating:

“But as concerning your mass, as it is now used in our days, I do say and believe it to be the most abominable idol that is in the world: for my God will not be eaten with teeth, neither yet dieth he again. And upon these words that I base now spoken, will I suffer death.” 6

Despite such unspeakable treatment and impending martyrdom Anne prayed,

“Lord, I heartily desire of thee that thou wilt of thy most merciful goodness forgive them that violence which they do, and have done, unto me. Open also thou their blind hearts, that they may hereafter do that thing in thy sight, which is only acceptable before thee, and to set forth thy verity aright, without all vain fantasies of sinful men. So be it, O Lord, so be it!” 7

On July 16, 1546, Anne was unable to walk or stand due to the extreme injuries inflicted upon her by her tormentors, and was carried in a chair to Smithfield just outside the London Wall. She was then fastened to a stake, her body being held up by a chain, and burned alongside three fellow martyrs. Anne Askew entered into the joy of her Master at the age of 26 and now waits with all those who throughout the ages have suffered alike.

“When he opened the fifth seal, I saw under the altar the souls of those who had been slain for the word of God and for the witness they had borne.
They cried out with a loud voice, “O Sovereign Lord, holy and true, how long before you will judge and avenge our blood on those who dwell on the earth?”
Then they were each given a white robe and told to rest a little longer, until the number of their fellow servants and their brothers should be complete, who were to be killed as they themselves had been.”
Revelation 6:9-11

The Unquenchable Flame: Discovering the Heart of the Reformation, by Michael Reeves B & H Academic, 2010
Great Lives From History: Salem Press
Histories Heros: Anne Askew
Select works of John Bale, D.D. Bishop of Ossory. containing the examinations of Lord Cobham, William Thorpe, and Anne Askew, and the Image of both churches edited for the Parker Society by Henry Christmas. Published 1849 by Printed at the University Press in Cambridge.
Ainscough Surnames: Wikipedia
Anne Askew: Wikipedia
MURAL: The Martydom of Anne Askew: by Violet Oakley (1874-1961)
Located at the Pennsylvania State Capitol
Photo: The Rack at the Tower of London