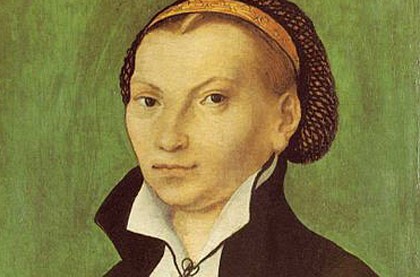 Who was Katharina Von Bora? A run away nun? Wife to one of the most well-known Reformers? A pioneer in the role of “pastor’s wife”? Yes, yes, and yes. She was also a brave, strong, woman that treasured the Gospel of Christ more than anything. There’s much women today can learn from the women God raised up during the time of the Reformation and Katie Luther is no exception.

She grew up entrenched in the Roman Catholic religious life. At age five she was sent to live at a convent due to her mother’s death. At age ten she was sent to the Nimbschen Cloister where her aunt, Magdalena von Bora, also lived. By age sixteen she took her vows to become a nun at said Cloister. Living in the nunnery, she had the opportunity to learn skills she wouldn’t have otherwise. She was blessed with the ability to read and write, proficiencies many of her time (especially women) never had a chance to experience. By the age of twenty-four Reformation teaching reached her and she was converted to the true gospel of Christ Jesus, forsaking the works-righteousness of the Roman Church.

Upon embracing these new doctrines and beliefs she knew she had to leave the cloister. She could no longer live a life dedicated to a false religion. On April 6/7, she fled the convent along with eleven other nuns. This was an extremely dangerous move for the women escaping and those assisting them for at that time renouncing your religious vows and smuggling nuns were both offenses punishable by death. But Katie’s love of Christ was stronger than her fear of death and so she bravely escaped. The escaped nuns were quickly placed in families or married off because there was no place for single-women in society at that time. Katie was the last ex-nun to find a home. Martin Luther had taken the case of finding homes for the renegade nuns and he was left looking for a place for Katie. Luther attempted to marry Katie off twice but both courtships fell flat; the first one due to the man’s fear of being associated with an ex-nun and the second one due to Katie’s disinterest.

Finally, Katie herself suggested Dr. Luther as a potential husband. After much thought Luther’s concluding response:

My marriage would please my father, rile the pope, cause the angels to laugh and the devils to weep. Source

So his mind was made up. Marriage it would be. Luther made it abundantly clear that he was not marrying Katharina because he loved her, rather he was trying to set example since he and other Reformers had spoken out harshly against the celibacy of the priesthood and the low view of marriage in the Roman Church. Once Katie found out that they were indeed to be wed she reflected and then prayed:

Now I shall no longer be Katharina, runaway nun; I shall be the wife of the great Doctor Luther, and everything I do or say will reflect upon him. But this must be what God intended for me or He would never have moved the doctor to ask me to marry him. It’s like an assignment from God. God, keep me humble. Help me to be a good wife to your servant Doctor Luther. And perhaps, dear Father You can also manage to give me a little love and happiness. Source

God heard and answered Katie’s prayer. The Lord blessed them with a very loving, caring marriage. Luther grew to love Katie deeply and was convinced God had given them to each other. Luther’s affections for his wife are apparent if one reads his writings, especially those on family and marriage.

Katie realized, as we saw in her prayers and reflections above that God had given her a duty in marriage. To allow Luther the ability and time to focus on his work for the Lord, Katie ran the home herself and kept and incredible schedule. Luther called her the “morning star of Wittenburg” because she rose at 4:00 am to start her days. She not only cooked, cleaned and ran the farm but also even butchered the animals herself!  She put her husband before herself because she ultimately put Christ’s church and His gospel before herself. She understood the importance of what her husband was doing. She supported him, and helped to keep his time available for serving God.

We have much to thank Katie for today. She and Luther gave us an excellent example of what pastoral families should look like. They were very loving and giving and because of this they hosted many guests most of the time. The Luther household was known for their “table talks” where the university students would come for dinner and discuss all things theological.

Katie also encouraged Luther when he was discouraged. It’s no secret Luther was a marked-man facing much opposition, as such discouragement is normal. Katie wasn’t always traditional in her ways of encouragement, though. One story tells of how she dressed in her mourning clothes one day while Luther was depressed.  When he questioned her about who had passed away, she replied, “Don’t you know, God is dead?” Of course, this was an avenue that worked with Luther as he soon saw the ridiculousness of his own state. It was Katie that kept on her husband to respond to Erasmus and so we today have The Bondage of the Will thanks to her!

The Luthers enjoyed a happy marriage of about twenty-years before Dr. Luther passed away. God blessed the couple with six children, four of whom lived to be adults. Six years after Luther’s death Katie also was called home to Glory.

In our day and age when much ink has been spilled regarding the recovery of biblical womanhood, it cannot be said that we are lacking in examples.  Just as God in His providence gave the church the great Reformers, we forget at our own peril the women who helped shape them.  While church history is no substitute for solid devotionals in the Word of God, it provides us with numerous examples of those saints who, through their strengths as well as their weaknesses, give us a tradition upon which we can stand.

About the Author: Hollie Dermer spends her days homeschooling, child rearing, cleaning, and enjoying this life God has blessed her with. She lives in Virginia with her husband, their two daughters and one son. Hollie blogs at The Dermer Family Blog.