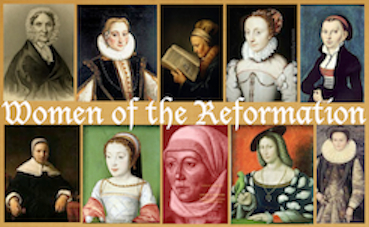 The sun never shone on a nobler band of women than those who labored in the Reformation. There is little need of literary embellishment, their sublime faith and heroic deeds throw a halo of glory around them, and they stand with the Master on the mount of transfiguration. The simple story of their unselfish lives comes to us across the centuries with power and pathos to stir the dullest heart to sentiments of gratitude and veneration. Remarkable alike for their great personal charms, extraordinary leadership, masterly mental powers, sublime heroism, and entire consecration to God and humanity, the women of the sixteenth century have never been equaled. – Mrs. Annie Wittenmeyer [1]

Welcome!  We are so delighted that you have joined us today at the start of our new series, “Women of the Reformation.”

Most of us are familiar with the great figures of the Reformation such as Martin Luther, John Calvin, Ulrich Zwingli to name just a few.  But what about the women?  Just as the men threw all that they were into Reformation work, so did the women.  They lived to see the gospel advanced and the Reformation triumph. Far from being passive observers, the women of the Reformation were active participants. Yet their story, as demonstrated by the lack of information that is available, remains largely untold.

In the upcoming days, you will be introduced to several prominent women of the Protestant Reformation by twelve Reformed women passionate about, what Martin Luther called, “the church’s true treasure” – that is, the gospel. While the authors of this series hail from various backgrounds and geographical locations, our differences are overshadowed by a shared love for Jesus and a deep yearning to see a new Reformation in our own day.

Our aim in this presentation is twofold. Firstly, we desire to remember our Reformation heritage. It has been said that those who forget the past are doomed to repeat it. At the time of the Protestant Reformation, Christianity had become hijacked by false doctrines, man-made traditions, superstitions, corruption, and all kinds of spiritual abuse. What’s more is that most Christians were illiterate and had to rely upon those who did not have their best interest at heart to teach them. It was out of these muddied spiritual waters that God raised up Martin Luther, an Augustinian monk, to father a movement that would bring the church back to the apostolic faith.  The opposition was fierce – coming from within and without. But this was a cause worth fighting for! When we study Reformation history we remember how God brought about a triumph at the most pivotal time in Church history since Pentecost.

Secondly, we are compelled by the biblical principle that calls for the older to teach the younger. The women of the Reformation have left the body of Christ a beautiful legacy of faith and endurance. Are we not surrounded by “so great a cloud of witnesses”? When we fail to uphold the women of the Reformation we rob the household of faith of the benefit of our great legacy.

The Reformation generally chronicles two categories of women. First there are the Reformers’ wives.  Many of them, such as Katharina Von Bora, were ex-nuns. Some were widows. They were ordinary women permanently altered by Luther’s bold proclamation of justification by faith in Christ alone.  The second group of women is royalty.  These were noble women who, for the sake of Christ, employed their rank to promote the Protestant cause. In doing so, they stood to lose (and many did) all earthly wealth and honor. Some were forced into exile. The bodies of others were tortured and mangled in unspeakable ways. And still others paid the supreme sacrifice for their faith.  Like their male counterparts, the women renounced everything that stood in competition with Christ no matter the cost.

Like all true Reformers, the women of the Reformation were passionate about the Word of God. They astutely grasped the doctrinal issues of the day and could hold their own (and then some!) in sophisticated theological discussions. They skillfully handled the Word of God at a time when owning your own copy of the Bible could be punishable by death.  They read theological books, wrote letters, published tracts, and courageously proclaimed the gospel.  When describing their commitment to the Word of God, one author explains, “They were steeped in Scripture and even the comparatively uneducated, who appear in the martyrologies and the heresy trials, gave their judges a terrific run at any point involving the Word of God.”[2]

You will also see that the women of the Reformation had hearts that were overflowing with mercy. Many opened their homes and out of their own sustenance provided for those fleeing religious persecution. Moved with compassion they turned their homes into safe houses and acted as ministers of comfort to the persecuted. Whether they penned their consolation or delivered their comfort by way of personal visitations, the women of the Reformation excelled in charity and good works. There can be no doubt that their active service refreshed many a weary soul in their day.

We recognize our little series to be a tiny scratch on the surface when it comes to acknowledging the whole of the contributions these women have made. However, it is our sincerest prayer that these brief sketches and reflections will strengthen your heart and increase your zeal. Moreover, we desire that you be inspired to be about the same business that our Reformation sisters were — the building up of our homes and our churches.

We thank you for joining us and invite you to enter into Reformation history to meet the women of old who have left the church a legacy of undivided devotion to Christ. May we follow them as they have so faithfully followed Christ.

They did not seek a cause; they were overtaken by it.    There is much in common with the statement of Martin Luther, “Here I stand I can do no other.” These are not women trying to write their names into the history books. They are simply witnessing to what they believed to be true: the scales had fallen, the light had shone, and they would die rather than deny it. – Mary Zahl[3]

We will start tomorrow with none other than the lovely Katharina Von Bora, wife of Martin Luther, affectionately referred by Luther as, “Katie, my rib.”

To kick-off this series we will be giving away one copy of Roland H. Bainton’s, “Women of the Reformation in Germany and Italy”.  Leave a comment to let us know you are interested in participating. Winners will be announced at the conclusion of our series sometime during the week of November 14th! International entries welcome for this contest.