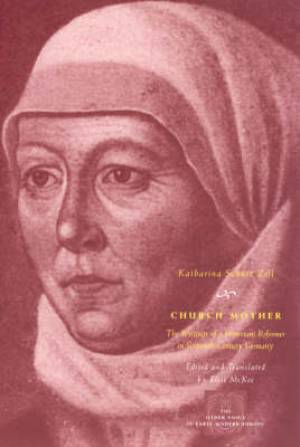 Ever since I was ten years old I have been a student and sort of church mother, much given to attending sermons. I have loved and frequented the company of learned men, and I conversed much with them, not about dancing, masquerades, and worldly pleasures but about the kingdom of God. – Katherina Schutz Zell

Regarded as one of the most outspoken women of the Reformation, Katherina Schutz Zell was born in 1497 in the city of Strasburg. While little is known of her early years, history confirms that she came from a prominent family and therefore received an excellent education. Although the young Katherina always had a strong interest in spiritual matters, it was after reading Luther’s tracts that her feet were put on the solid rock of God’s Word. Whereas she once despaired over her salvation, the moment Reformation doctrine took hold of her heart, she became consumed with sharing the gospel of grace with others.

The city of Strasburg was what is known as a “free city” meaning there was no obligation to enforce the Edict of Worms against Luther and the Reformers. Because of this, Katharina was exposed to a great deal of Reformation influence. In 1518, Matthew Zell, a former Catholic priest turned Lutheran, was called to preach in the Cathedral in Strasburg. Katherina, among others, listened intently as the great Reformer preached the doctrines of our faith. He must have been an impressive preacher since the two were married five years later. Upon learning of Zell’s marriage, the Catholic bishop revoked all of Zell’s privileges and excommunicated him. At the same time vicious rumors of infidelity began to swirl about the Zell’s.  As the criticism began to heighten, the Reformer’s “helpmeet” would come out strong in her husband’s defense. Katherina called out the immoral behavior of the Catholic clergy and pushed back hard when accused of speaking out of turn.

You remind me that the apostle Paul told women to be silent in church. I would remind you of the word of this same apostle that in Christ there is no longer male nor female [Gal. 3:28] and of the prophecy of Joel [2:28-9]: ‘I will pour forth my spirit upon all flesh, and your sons and your daughters will prophesy.’ I do not pretend to be John the Baptist rebuking the Pharisees. I do not claim to be Nathan, upbraiding David. I aspire only to be Balaam’s ass, castigating his master.

Known for her capacity to offend both Catholic and Protestant religious establishments alike, Katherina never pursued her arguments beyond biblical orthodoxy. Yet, it was clear that Matthew Zell had found a worthy ministry partner. Of her own marriage to Matthew, Katherina would say she wanted only to be the helpmeet of her husband, and a “little piece of the rib of the sainted Matthew Zell.”

Much in the spirit of the Luther’s, the Zell household became a parsonage for traveling Reformers, and Protestant refugees.  Katherina, known for her warmth and  hospitality, not only cooked and cleaned for her guests but gladly partook in their theological conversations — so much so, that many Reformers of her day “ranked her above many doctors.” In fact, Katherina was known to maintain correspondence with Luther, Zwingli, and Bullinger, and many other prominent Reformers. As Reformation theology was still in the process of being meted out so-to-speak, the Zell’s were famous for their tolerance. Whereas some felt to divide over certain theological points, the Zell’s were fairly consistent in their belief that separation from Rome was the single criteria. The Zell standard for fellowship, as described by Matthew Zell himself was, “Any one who acknowledges Christ as the true Son of God and sole Savior of mankind is welcome at my board.”

Katherina  had a special heart for the wives of displaced Protestant leaders. She penned many tracts and hymnals to encourage the women who suffered the pain and hardship of separation from their husbands. Once, in a neighboring town called Kensingen a minister was forced to leave. One hundred and fifty men of the parish accompanied him for several miles but when they returned the gates to the town were shut. One minister was caught and executed while the rest fled to Strasburg. Moved with compassion for their plight, Katharina not only provided beds and meals for most of the men, she also published a tract for the wives left behind.

While she clearly had a heart for wives of the Reformers, the bowels of her great mercy extended to all. Katherina was a nurturer by nature and she tended to the needs of widows and orphans, the poor, the sick, and the needy. She also became a strong advocate for those who suffered injustice and were without voice.  It is no wonder that her own husband assigned her the duty of “Church Mother of Strasburg.”  One example of her indiscriminate mercy ministry is found in the account of a certain magistrate who, because of leprosy, had been quarantined. Her consolation, in the form of personal visitations and publications were of great refreshment to this poor soul.

At first you were bitter and utterly cast down till God gave you strength and patience, and now you are able to thank him that out of love he has taught you to bear the cross. Because I know that your illness weighs upon you daily and may easily cause you again to fall into despair and rebelliousness, I have gathered some passages which may make your yoke light in the spirit, though not in the flesh.

While Katherina Zell is said by some to deserve the title of “Woman Reformer of the Reformed Church” and “Church Mother” this extraordinary woman carried a heart grief that most of her contemporaries would never know. Having suffered the deaths of two infants and no more to follow, Katherina was subject to dark periods of depression and deep sadness.  Though she walked by faith, the thorn in her flesh was her childlessness.  It is said that she was prone to think of her childlessness as God’s punishment on her life. Though this gracious providence caused her great earthly sorrow, it is possible that it was the very thing that God used to keep this precious saint near the cross.

I have learned to kiss the wave that strikes me against the rock that is Christ. – Charles Spurgeon

In 1548 Matthew Zell died leaving a heart-sick Katherina behind.  Immediately afterwards she spent some time in Basel with a young minister and his family but she longed to return home to Strasburg to resume her work. Upon doing so, she continued her mercy ministries but it wouldn’t be long before her own health began to fail. During her last years, many of her letters were written from baths as she suffered greatly from dropsy.  Yet, she continued her labors of love until her strength utterly failed her. Unfortunately, the exact date and location of her death is not known. It is said that, like Moses, Katherina “died of the kiss of God and no man knows the place of her burial.”1

Today, in honor of Katherina Zell, we are giving away 1 copy of “Spiritual Mothering: The Titus 2 Model for Women Mentoring Women” by Susan Hunt.  Please leave a comment to let us know you are interested.  We will notify winners at the conclusion of our series.  International entries are welcome for this contest.

The next post in this series is Olympia Fulvia Morata, A Tribute by Petra Hefner