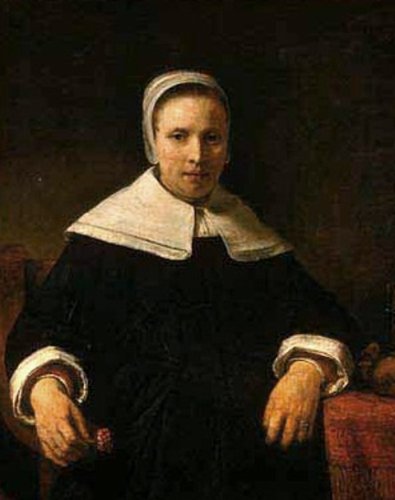 If a grown woman does not know who she is, perhaps it is because she did not have the love of her father when young. Such was not the case of Anne Dudley Bradstreet.

Born in Northampton, England, in 1612, Anne Dudley was the first daughter of Thomas Dudley and Dorothy Yorke. Of Puritan good standing, she was fortunate to grow up under privileged circumstances, receiving a rich education at her father’s behest. Not only did he devote time and attention to his inquisitive daughter, Thomas Dudley doted upon Anne as his favorite, delivering upbraidings and challenges that would carry her from the cradle to a brave and sturdy womanhood.

At 8, Anne’s father became steward to the Earl of Lincoln, rendering the grand manor of Sempringham their new home. Tutored within its paneled walls, she excelled in theology, literature, and history, with a penchant for language that shone in her aptitude for not only English, but also Greek, Latin, French and Hebrew. Learning to compose verse came at age ten; about the same time she began practicing how to use a quill. Her father, a “devourer of books”¹ himself, told Anne that “writing and Christianity went hand in hand, that the poet’s job was not simply to invent a line of pentameter but to consider how best to serve God while reading and composing.”² Taking his words to heart, she understood “that poetry reading and writing should not be simple intellectual or emotional acts. Rather, they should be like ladders to God, like prayers.” ³

Having survived two serious illnesses in her youth, including the deadly smallpox, her soul was tried by limitations set by fever and weakness, but she never despaired. She believed she was in God’s hands, treating her fears with prayer. But when she met good-natured Simon Bradstreet, assistant to her father in the management of the Earl’s estate, their budding friendship gave way to newly discovered passions both overwhelming and disturbing, leaving her soul bereft and tried afresh in a whole new way. She was falling in love.

At 16, then considered old enough, Anne married 25-year-old Simon at a time when England’s throne was imploding, yet still wore the crown. Failed efforts to modify the King’s policies dimmed Puritan hope, forcing them to look westward in hope of religious freedom. Though loath to sacrifice their pedigreed comforts, Anne and Simon, along with her parents and over 300 other Puritan emigrants, took leave of the motherland, setting sail aboard the Arbella for the New World. Enduring an arduous 66-day journey, they arrived upon the rocky shores of New England, landing in Salem, Mass., on June 12, 1630. Further and bitterer hardships ensued, including sickness, food scarcity, threat of Indian raids and the necessity of having to live with the Dudleys in a single wood hut as a first home.

But as Providence proved faithful, through stalwart courage and perseverance their circumstances improved. Simon’s business skills and rank as diplomat continued to gain him favorable status, eventually rising to become governor of the Massachusetts Bay Colony. Over the years, they moved to several different locations, including Salem, Boston, Cambridge and Ipswich. They finally settled on a farm in North Andover, in part to acquire property and to protect his vulnerable family from Indian attack.

Marriage to a man of such prominence, however, meant for Anne long days and nights alone at home. Though she suffered great bouts of loneliness, she did not allow it to cage her. Resourceful, she found occupation for her talents in the midst of rearing eight children. Her only need — a pen. At a time when writing was considered the chief domain of men, she managed to carefully work within the confines of orthodoxy, gently challenging the status quo, as echoed in the seventh stanza of Prologue:

“Let Greeks be Greeks, and Women what they are.

Men have precedency and still excel;

It is but vain unjustly to wage war.

Men can do best, and Women know it well.

Preeminence in all and each is yours;

Yet grant some small acknowledgement of ours.”

For a woman who happened to be intelligent, a writer and a Puritan, Anne met with her share of conflicts within and without. Well-known for her couplets, including the more ambitious heroic couplet, poet John Milton later criticized her for being simplistic and amateur, casting “the chain of rime” as the culprit that kept English poets from rising to literary heights. But to her, “[R]hyme was a discipline that helped elevate the writing of poetry to a religious meditation.”⁴ Poetry was not a means of escape as much as it was a form of communion, and a  way to resolve issues of faith and politics — even love — that otherwise went unspoken. Her poetic appeals on behalf of women were perhaps not so much an outcry of injustice than a plea for men to have a more complementarian view. Aware of her place in society, she often would offer apologies in her poems in an attempt to deflect charges of inaccuracy, usurping male authority and plagiarism.

At 38, Anne Bradstreet’s first book of poems, The Tenth Muse Lately Sprung Up in America, was published in London in 1650 and received favorable reception in both the Old World and the New. She continued to write despite suffering paralysis in her joints before succumbing to tuberculosis in 1672. Of her personal assets, there is left no portrait or headstone, except that of her writings and a house in Ipswich.

Six years after her death, a digest of self-edited works entitled Several Poems Compiled with Great Variety of Wit and Learning” was posthumously published in America, and included one of her most famous poems, To My Dear and Loving Husband .

Anne’s father made the first imprint upon her soul, and his lasting effects are found in a voice of ever-rising confidence at a time when women were thought to be weak, much less heard.

Her Flame, a Muse

Whatever the endeavor, someone must always go first.

Of England stock and Puritan pride,

—Plain and Stoic, the mainstay.

Trained upon a trellis,

Sown among the strong,

—Bearing neither thistle nor thorn.

Reluctance is a strong child.

But ‘twas hers to be braver still,

Of whom we know and where arose

Take firmer grasp, my soul, while I poke for light.

of Truth, home and bread

—As well do mighty men.

Shall tears and groanings refuse?

of Solace and Humour, Polity and Wit,

Before the wax is gone, bring me couplets

—Must I fight for those, too?

I am also this.

Poor in spirit, deep in love

—As in death, rich in life.

Before the Birth of One of Her Children

A Dialogue between Old England and New

A Letter to Her Husband, Absent upon Public Employment

By Night when Others Soundly Slept

In Honour of that High and Mighty Princess, Queen ELIZABETH

The Author to her Book

The Flesh and the Spirit

The Four Ages of Man

To Her Father with Some Verses

To my Dear and Loving Husband

Upon Some Distemper of Body

About the Author:  Between homeschooling and homemaking, Elizabeth DeBarros finds time to study theology, laugh with friends, and share the love of God to as many she meets. At findingthemotherlode.wordpress.com she writes to honor God by sharing her observations, meditations, and on rare occasion, her poetry. She resides in the foothills of the Blue Ridge mountains in Northern Virginia with her beloved husband, two sons, and their new kitten.